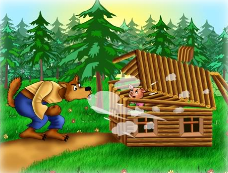 Stewardship, Your Kids, and The Three Little Pigs

by Beau Henderson, Financial Advisor and CEO of RichLife Advisors
Parables and stories are great way to teach basic money principles to kids and adults alike. Today, we’re going to address basic money questions you might have as a parent such as:
Regardless of where you are at with your personal finances, you can begin teaching your children good money habits by applying the one, simple practice of wise stewardship.
Stewardship is a big word that sounds a little outdated, but the concept is both timeless and wise. As a financial advisor, it forms the foundation for what I pass on to my financial planning clients, my coaching clients, and my family.
Its root word is keeper,
meaning one who cares for and manages people and things.
Do you remember the story of The Three Little Pigs? It tells the tale of 3 brothers who were sent off into the world. Imagine that their parents gave them each an equal share of money, and told them to invest wisely!
1. The first little pig had a grand time and spent all his money on video games and candy. Because he had nothing left to build his house with, he used the left-over straw that blew across the road.
2. The second little pig managed to control himself a little better and had money left to buy some wood for his house. But things cost much more than he realized, and in the end all he could afford was a big pile of sticks.
3. The third little pig realized that a house was a pretty important investment. He used almost all the money he had to invest in bricks and mortar and built his house accordingly.
Along came the big bad wolf, who dearly loved to eat little pigs. When he saw the flimsy house built of straw, he smiled and said, “Let me in, Let me in, or I’ll huff and I’ll puff and I’ll blow your house down!”
“Not by the hair of my chinny chin chin!” replied the first pig.
And as the story goes, the wolf huffed and he puffed and he blew the house down. The first little pig shrieked and ran next door to his brother’s. 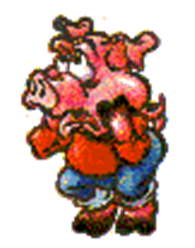 Now the wolf followed and the same thing happened again. The house of sticks was little better than the straw, and the same thing happened again, only now we have two little pigs running for their lives.
Terrified of the wolf, they go to their brother’s small house of bricks. He invited them inside where it was warm and cozy. No sooner had he shut the door then the Big Bad Wolf came knocking.
“Let me in, let me in! Or I’ll huff and I’ll puff and I’ll blow your house down!”
And this time, the third little pig was able to reply, “Not by the hair of my chinny chin chin,” with absolute certainty, because he had built his house the hard way. Sure enough, that old wolf huffed, and he puffed, and he blew and he blew. But that house of bricks did not fall down.
When planning for the financial future of your family, you want to rely on timeless principles based in certainty, not luck.
The principle of WISE STEWARDSHIP dictates that the better we take care of something – money, relationships, bicycles, toys – the better chance we have of getting more of that thing or something better. Teach your children to be “the keeper” of their money. Teach them to do the “hard” thing first and invest wisely like the third little pig. Apply the following 3 tips to help build the foundation of wise stewardship in your family.

1. Teach kids to take care of what they already have if they want something more.

3. Teach your kids how to SPEND, SAVE, and SHARE.

Teaching your child how to care for what they have by doing the hard work now will provide a sound foundation for financial success in the future. What a lasting gift that is for our kids!
What are your family’s money challenges? How does stewardship play a role in your life? Drop me a line with your money questions or stories – I’d love to hear from you!